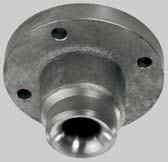 The axial flow single orifice full cone nozzles form a conical shape form that covers the complete surface. This type is accepted as the most common standard one in the full cone nozzle family. The wide option for materials, flow rates, spray angles and connections make these nozzles quite preferable where the conical spray formation is demanded.
The axially fed liquid is swirled inside the nozzle body by the help of specially machined X-insert, slotted disc or S-vanes so that the liquid is shaped full conical just after it leaves the nozzle orifice. 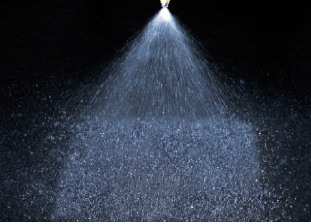 The round full cone spray nozzle can be converted to a pyramid (or, square projection on the surface) by a special design of the nozzle orifice section. Orifice looks like a duck-bill which help to form the full pyramid spray formation. The pyramid form turns right or left as the spray height is increased or decreased. These nozzles are specially demaded where the precise limitations are prerequisite for the application. 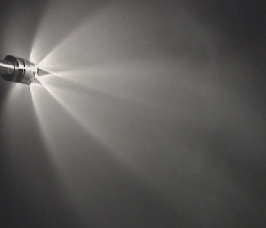 The body structure of the multiple orifice spray nozzles is bigger than common full cone nozzle types. It contains minimum 2 or more orifices in one body. Since the same amount of liquid is divided into smaller orifices, it creates finer droplets compared to the same flow rate single orifice full cone nozzles. The small droplets can be achieved in low pressures i.e. even 1 bar. It is highly recommended to use a line filter due to the risk of orifice clogging.

The spray formation is the same as the axial feed full conical spray nozzles but the body and the feed line is different. The liquid enters the nozzle body from the side (90° deflections with respect to nozzle orifice), and it turns inside the body by the effect of centrifugal forces, finally it leaves the orifice in the form of full cone spray. The orifice is machined in a separate part called as the mouthpiece that can be removed. The flow rate is not only adjusted by orifice itself but also the inner orifice from which liquid enters into the nozzle body. Since there is no insert to create the swirl effect, these nozzles are quite resistant to clogging.